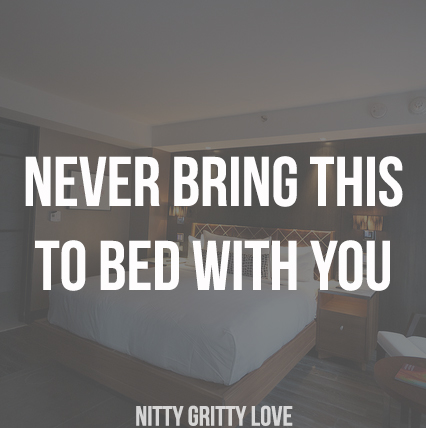 It’s the ultimate buzz-kill. A tiny chastity belt. A downer. A fun-ruiner. A zombie-maker.

Seriously. How many times have you laid in bed at the end of the day, mindlessly pinning on Pinterest or scrolling through Instagram on your phone? If you’re like me, maybe you have no idea how many times—a lot of times, though. A lot of times.

Just last night I probably read three Buzzfeed articles, checked my email, beat two levels of Candy Crush, and pinned 10+ new recipes for me to never ever cook. Gosh, it even sounds kind of productive when I list it out like that.

Too bad like, all, of those things are pointless.

Stephen King often talks about how pointless electronics are:

If you’re just starting out as a writer, you could do worse than strip your television’s electric plug wire, wrap a spike around it, and then stick it back into the wall. See what blows, and how far.

Swap out “writer” for “wife” and you’re golden. And iPhones are just a bad as televisions. If you want an awesome, intimate relationship with your husband, you might be best off throwing your phone out the window.

But again, if you’re like me, you like your phone. I use my phone far too much to ever throw it away. After all, I need it for work. (Right? . . .) So, that’s where boundaries come in. Like not bringing your phone to bed with you. Like not lying there next to each other while you each stare at your phones until you fall asleep. Like not waking up on Saturday morning to the sound of the Clash of Clans theme song coming from your husband’s phone. (Or maybe that’s just me? *Sigh*)

I don’t want to live parallel lives just because we can’t stop staring at our phones. All they do is suck time/awesomeness from our relationship. They cause us to waste possibly the only time we have together in a day. They’re just plain not worth it.

Make a point to cherish the time you have with your husband. Even if you only have 30 minutes after your crazy-long day, and all you want to do is zone out, make him the priority. You’ve got nothing to lose and everything to gain by plugging in your little time-sucker for the night. It feels quite nice, actually.

So next time you want to crawl into bed with your phone, start making out with your husband or something. See where it goes. I bet it’ll be more fun anyways.